A Gallant Rescue with a Sad Ending

A Gallant Rescue with a Sad Ending

Every day holds new challenges for the dedicated team of Honeyguide rangers working to conserve and protect wildlife in Burunge Wildlife Management Area, a parcel of land lying in the migratory corridor of the Tarangire-Manyara ecosystem in Northern Tanzania. The wildlife is plentiful and includes some rare and beautiful species, such as the African leopard Panthera pardus.

Some days are full of life and beauty, while others hold heart-wrenching tales of struggles for survival. One unfortunate young male leopard spent an entire night in the waters of Lake Manyara. This is his story.

On the night of 12th August, fisherman from nearby Ngolee village saw a leopard in trouble in the highly alkaline waters of Lake Manyara, roughly 150 meters from the shore. There didn’t seem to be anything they could do immediately as it was late at night, but early the next morning they went to check on the leopard. On seeing it was still struggling in the water, they called the Honeyguide Rangers who promptly arrived with the TANAPA veterinary team. 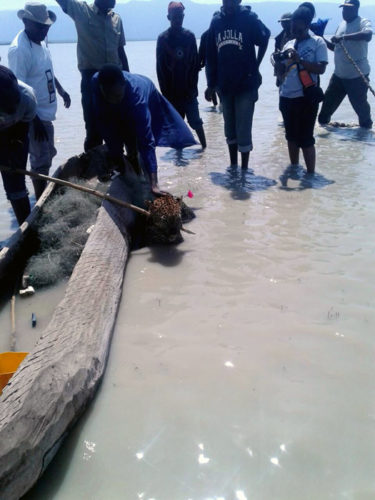 What was instantly clear to the Honeyguide-led rescue team was that the leopard had been struggling to avoid drowning for almost 10 hours and was exhausted and nearing the end of its strength. They quickly hit the cat with a tranquilizer dart which took immediate effect, and the team then rushed into the water to save the leopard from drowning as the drugs took hold and he sank into unconsciousness.

“We managed to get the leopard to shore where a vehicle was waiting to relocate him to the park,” said Daniel Loiruki, the Honeyguide Field Officer. “We cheered at everybody! Once we arrived at Tarangire National Park, a drive that took about 2hrs, we were anxious to see if he had woken up, but it looked like he might not have survived.”

Loiruki said they waited for almost 30 minutes for the cat to come round from the coma but to everyone’s regret he didn’t. The leopard sadly died without regaining consciousness.

The team then decided to go to the park headquarters for further investigations. After some hours of work they concluded that this 5 year old male leopard may have consumed poison. He had become ill and and had gone to the lake to drink water in an attempt to combat the effects of the poison. Unable to escape the waters, he had struggled there all night, becoming weaker. The fatigued cat was then administered a sedative that may have been too strong for his exhausted and poisoned system, inadvertently contributing to his death.

The team had tried their best to save the young leopard’s life but it was too late. “This incident upset me completely. After all the effort we made, this was a sad result” said Richard Levilali, one of the Honeyguide Rangers. “After receiving the call, I drove as fast as I could while trying to put all our equipment together to save the leopard, but our story just ended badly. We didn’t manage to save the big cat, and it hurts”

The loss of animals such as this juvenile leopard to poisonings and other retaliatory killings is one of the saddest results of the very real conflict between humans and wildlife here in Burunge WMA and elsewhere across Tanzania. One of Honeyguide’s major programs is centered on harmonizing the co-existence of wildlife and human beings in the same environment. Honeyguide and its partners have developed highly technical and proven community-based strategies for achieving these ends. For example, construction of Living Walls around homesteads protect livestock from predators, such as lions, hyena and leopards. These help to reduce the retaliation killings in the regions. If these strategies become more widely adopted by the community we hope to reduce the loss of wildlife, such as this young leopard to poison.