On Thursday 16th of October Athuman Mohamed Honeyguide’s Operation Commander, received a phone call from a Tingatinga community member. They said that there was a baby elephant found wandering alone in Mabona. Immediately and without wasting any time the Enduimet mobile unit went to the scene to confirm the story and find out what had happened.  Once they found the calf they began looking for the family to which the young animal belonged, but they couldn’t find it. “The baby elephant got tired and exhausted, so we had to take him to Sinya camp to keep an eye on him” said Oshumu Lembaya, Anti-Poaching Manager. 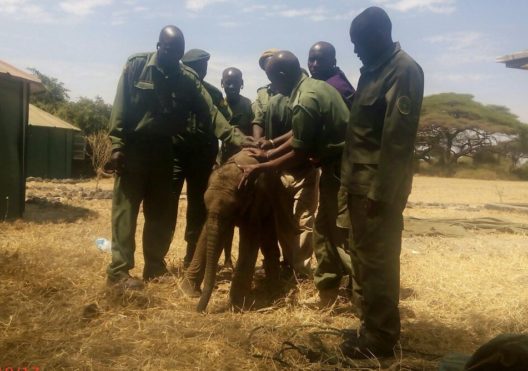 The story has a sad ending, as to everyone’s regret the little elephant died two days after his rescue. The exhaustion and trauma had been too much for him – he had survived for only 10 days with his mother before her death and his abandonment. The poachers were truly heartless to cause the death of this young elephant by killing his mother. Unfortunately, this story is not uncommon, and these cases remind us that the damage done by poachers extends beyond even the individual animals they kill and into the wider habitat and ecosystem.

At the time of writing, however, investigations are still going on to find the missing tusks and it is hoped that the culprits of the crime will be identified and caught. In the meantime, we continue to do everything we can to support the fight against the poachers, and help protect the elephants of East Africa.