Volunteering assists, given a second chance for a lucky bull giraffe

Volunteering assists, given a second chance for a lucky bull giraffe

“We had just arrived back to camp, after a long walk to the abdomen hotel on the mountain. It was around 12 pm when we received the news that juvenile bull giraffe had been trapped in sodium pool (the Sinya old Sinya mines)” Kara Memet start to narrate. Along with the other two volunteers, Honeyguide’s given them a chance at Enduimet to experience a vast community owned wildlife management area. At the beginning of their second week, they had to do a tough, however pleasant job. 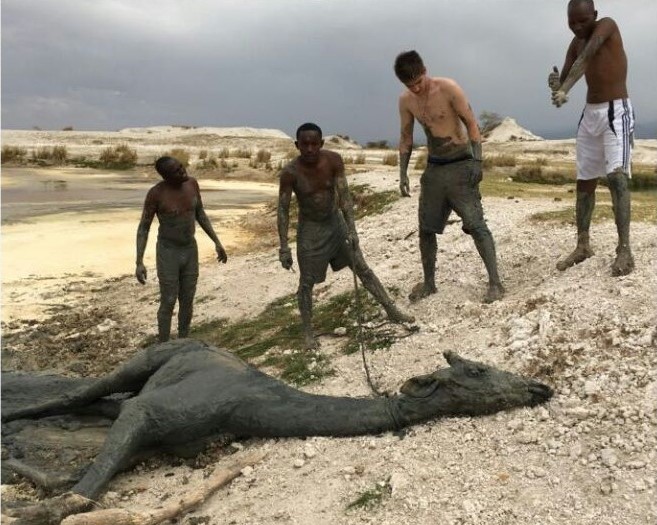 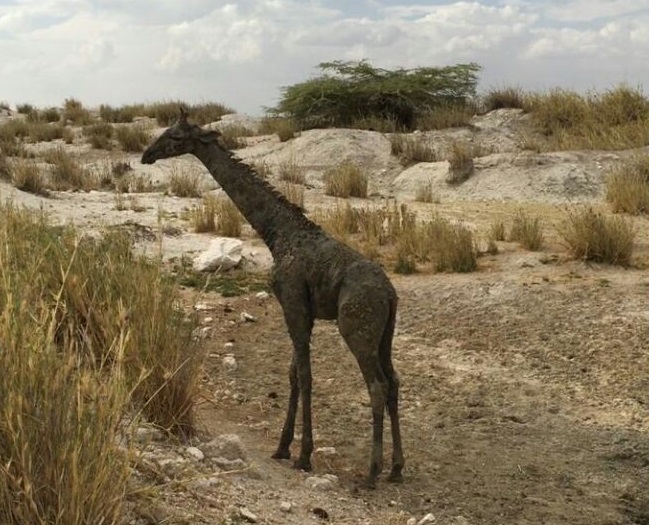 The giraffe had been in the pool since early hours of that morning, so it was important to remove it quickly or it will become exhausted and die. The group includes three volunteers and three Honeyguides led-rangers headed to the scene. They find that it had become stuck around 6 meters from the bank. Again, the pool has a thick layer of crust over its surface which conceals layer of mud below. This tricked the giraffe into thinking it was solid ground and it wondered straight onto pool. Thinking about what to do, then realized they need a rope and picked up four large pieces of fallen wood for the platform.

At first the giraffe was still laying, exhausted, didn’t even allowed the rescue team to wash his face and clear his eyes and nose of mud. After around 15 minutes he managed to raise his head, and after a further 10 minutes he slowly rose to his feet.

Struggling a great deal, but by the time they laid out the logs to get close enough, the stranded giraffe could barely raise his head from the mud.

With a final great heave, they managed to pull the giraffe free from the pool and onto the bank, although they were happy to have him free but very worried about his health as he didn’t seem to have enough energy to lift his head. Quick as possible, one man gathered some water from an adjacent pool and proceeded to clean his face so that he could see and breathe without obstruction.

Although he hadn’t gone in as far as previously and the team knew it could be easier to get him out this time. Jonas Hurter a volunteer went far “We were all worried that he may succumb to his exhaustion after another struggle. Nevertheless we didn’t give up, and waded into the water and tied the rope around his waist. We begin the same routine of pulling him closer every time he struggled, until the rope was close enough to be the car”

After this point, it was up to him to summon the energy to rise to his feet but again, the team did what they could by facing him in the appropriate direction, and persuading him to rise. After a good 20 minutes he suddenly rose his head. The guys were so pleased to see to his feet. They stood next to him and he would slowly walk with them to safety. He then began to run as fast as his tired body could carry him until he was off the horizon

“I cannot begin to explain what an amazing experience it was for us volunteers and all of the guides (of whom made it possible for us to experience and take pet in such an incredible rescue mission” Jack Simidian explained.